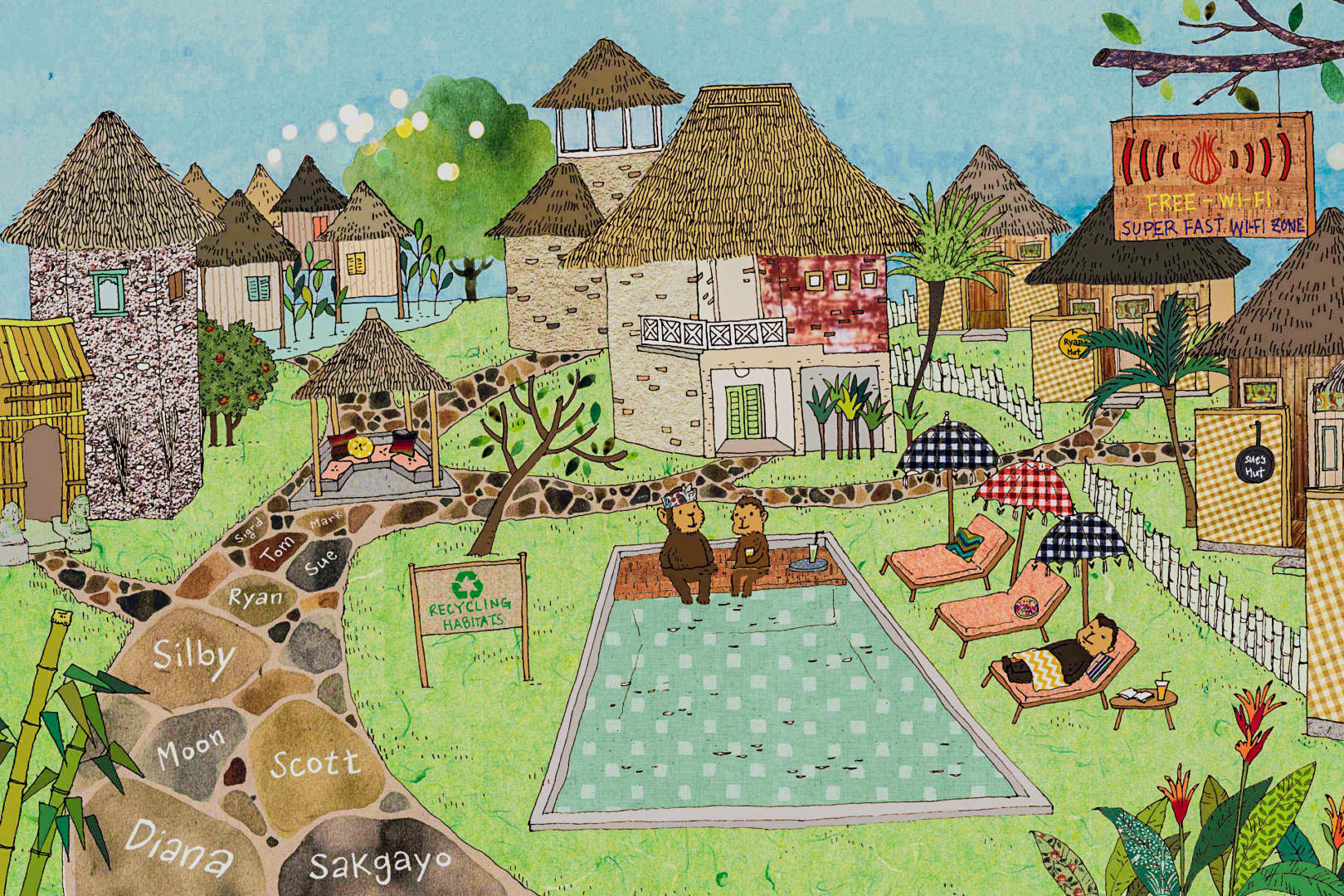 Like to jump into the pool after coding? The Onion Collective started 2012 in Ubud,  as the oldest co-working & co-living space on Bali, when the life-style of digital nomads just was born.  It’s  soulfeeding roots go back to the 70s with love, peace & happiness. 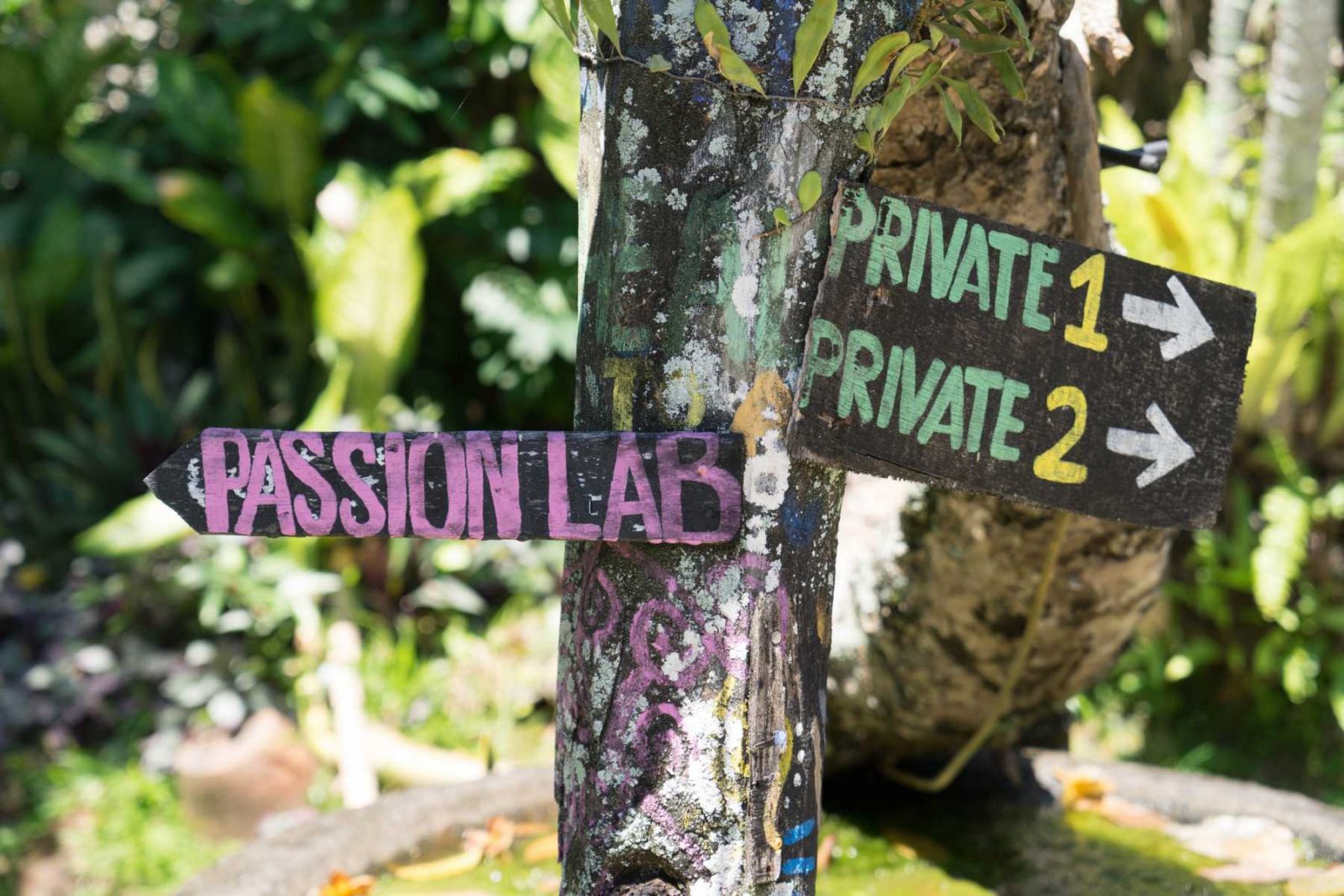 While  other co-working spaces turned more business-focused, Onion stays an inspiring place with a mission beyond money-making. So it still is the most affordable co-working space also, starting with 50.000 IDR day-pass. 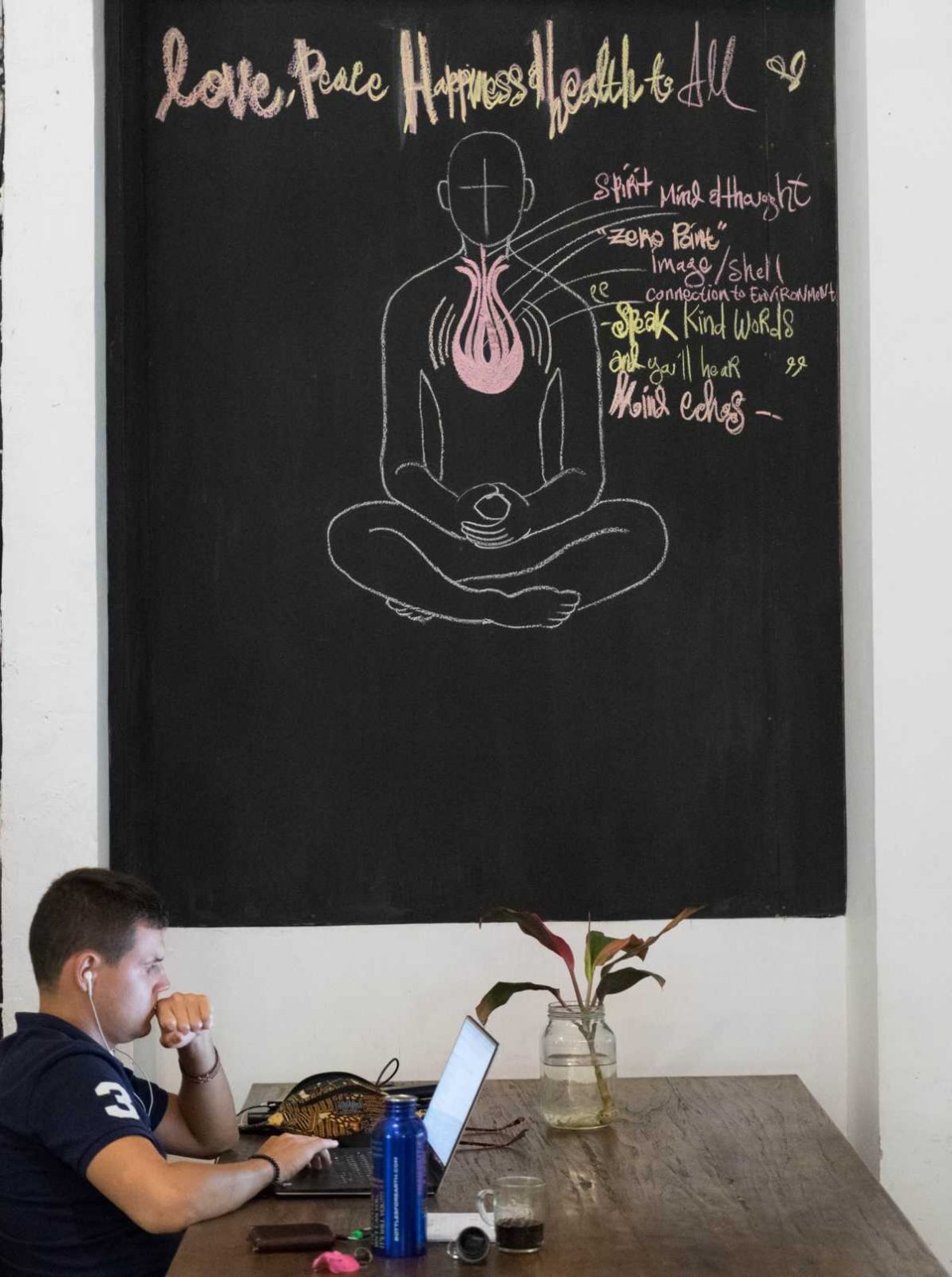 Networking magic happens at the Onion Café at night – travellers & creative people around the world meet at the restaurant. I never met so many wonderful artists and travelling soulmates in Ubud like in this place. 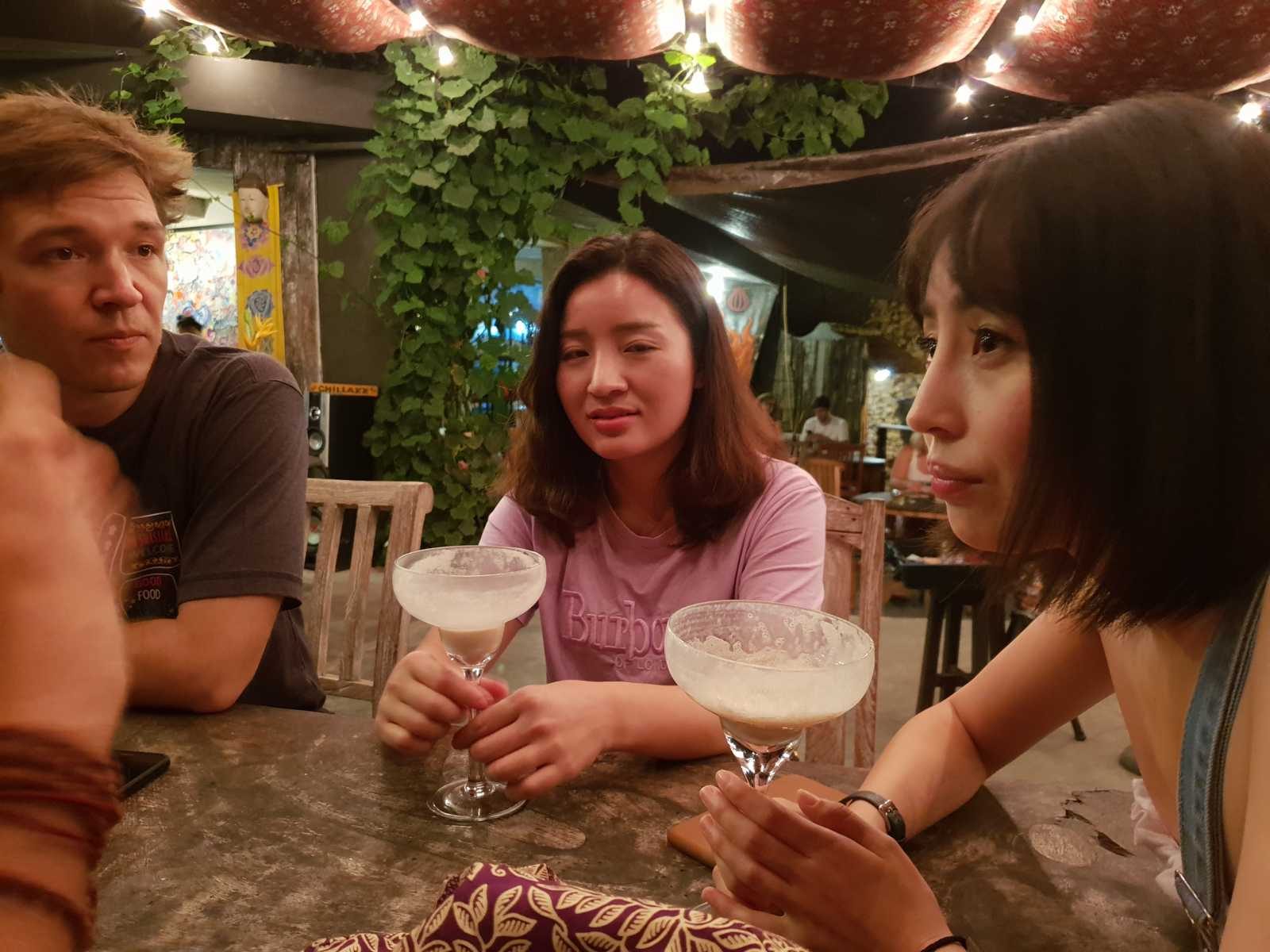 Mark Kuan is the founder spirit of the Onion – handling it with a lot Asian wisdom to keep it a special place. More on the Onion temple of Chill here

Regina is the welcoming spirit of the Onion, supported by a like-minded team.

Find the Onion of Airbnb here. There are private rooms & dorms.

Onion collaborates with  Bali Moon project – jewelry by the tribe.

Hi Gusdek, I spotted you at the cremation ceremony 😀 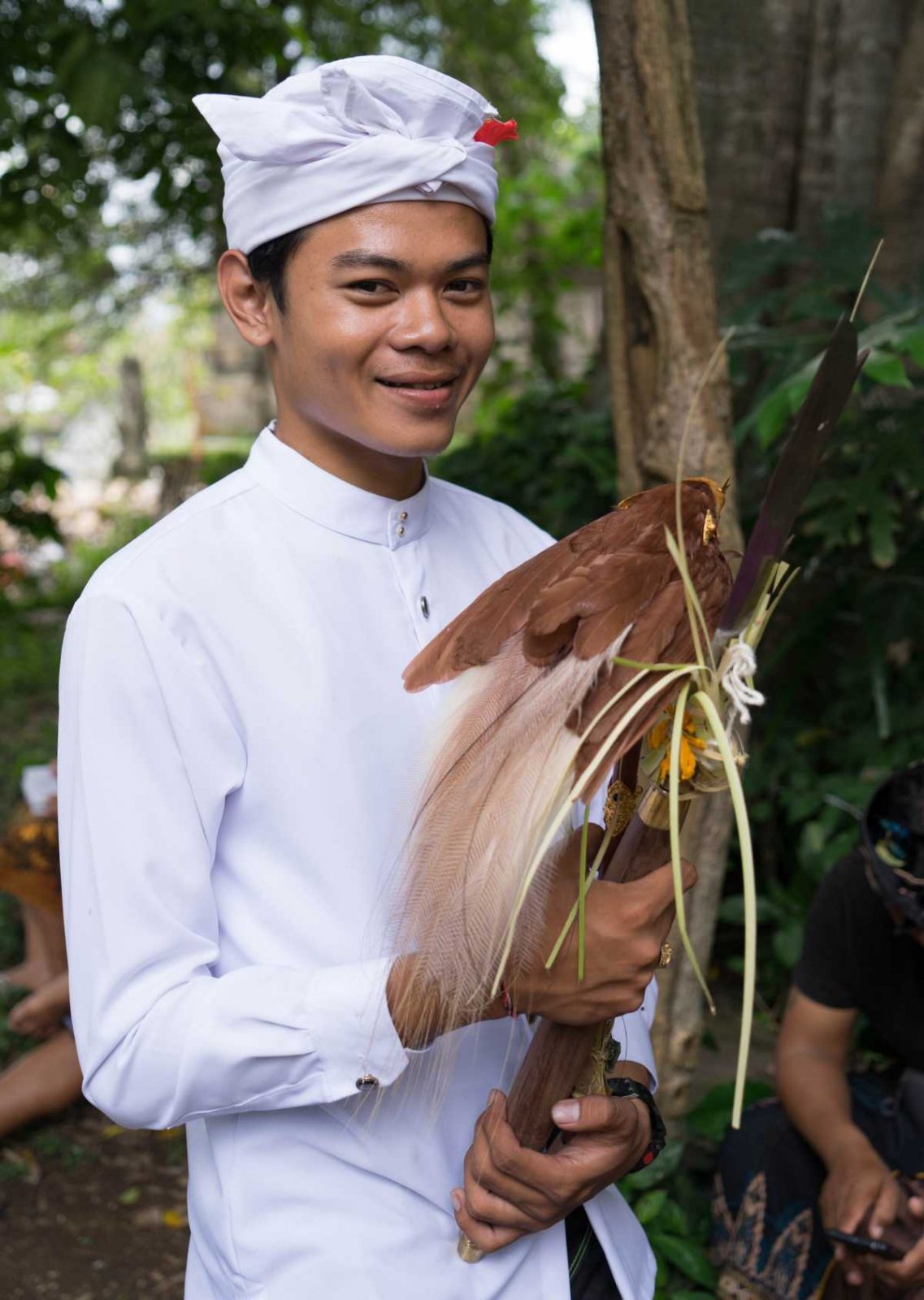 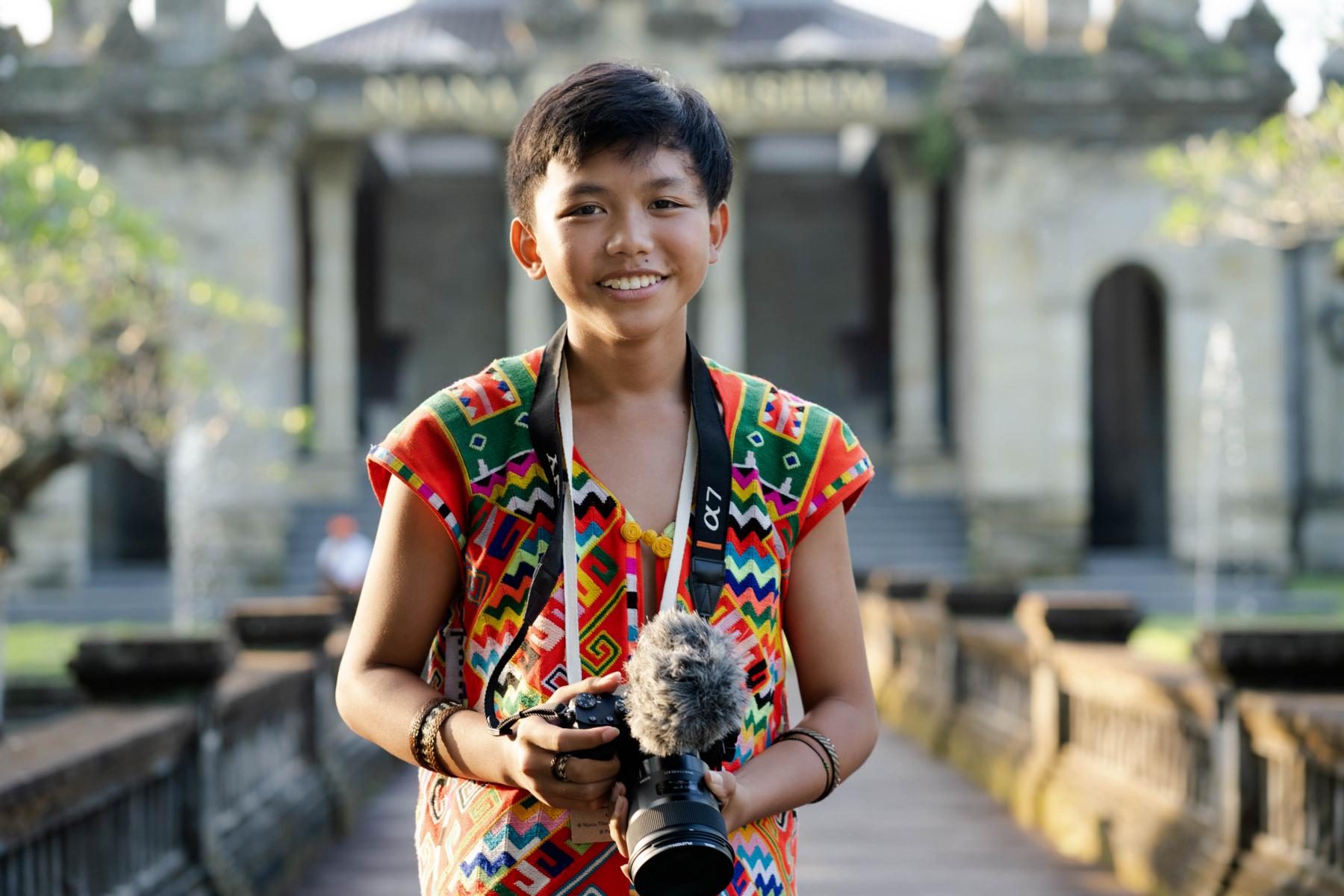 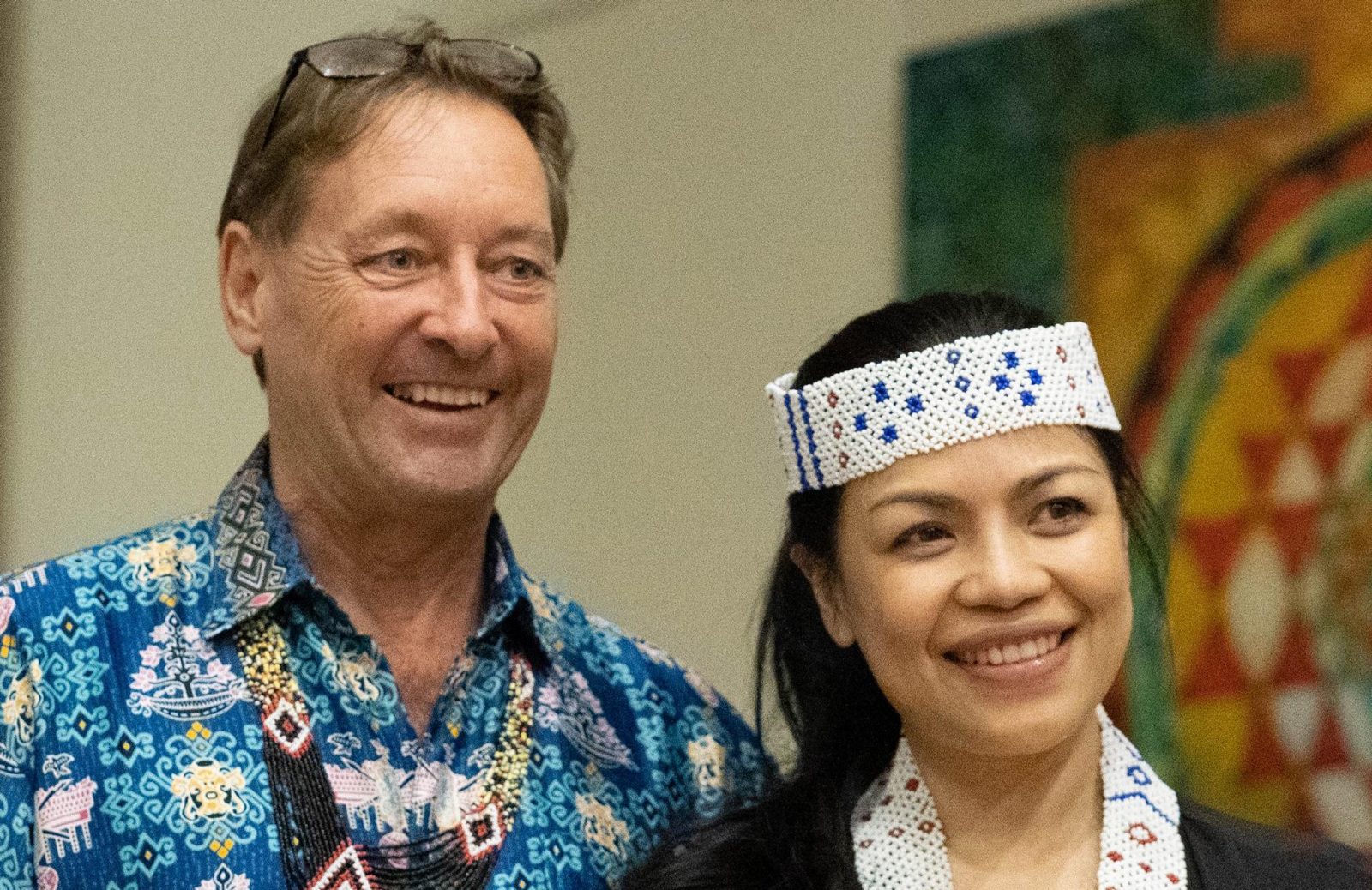 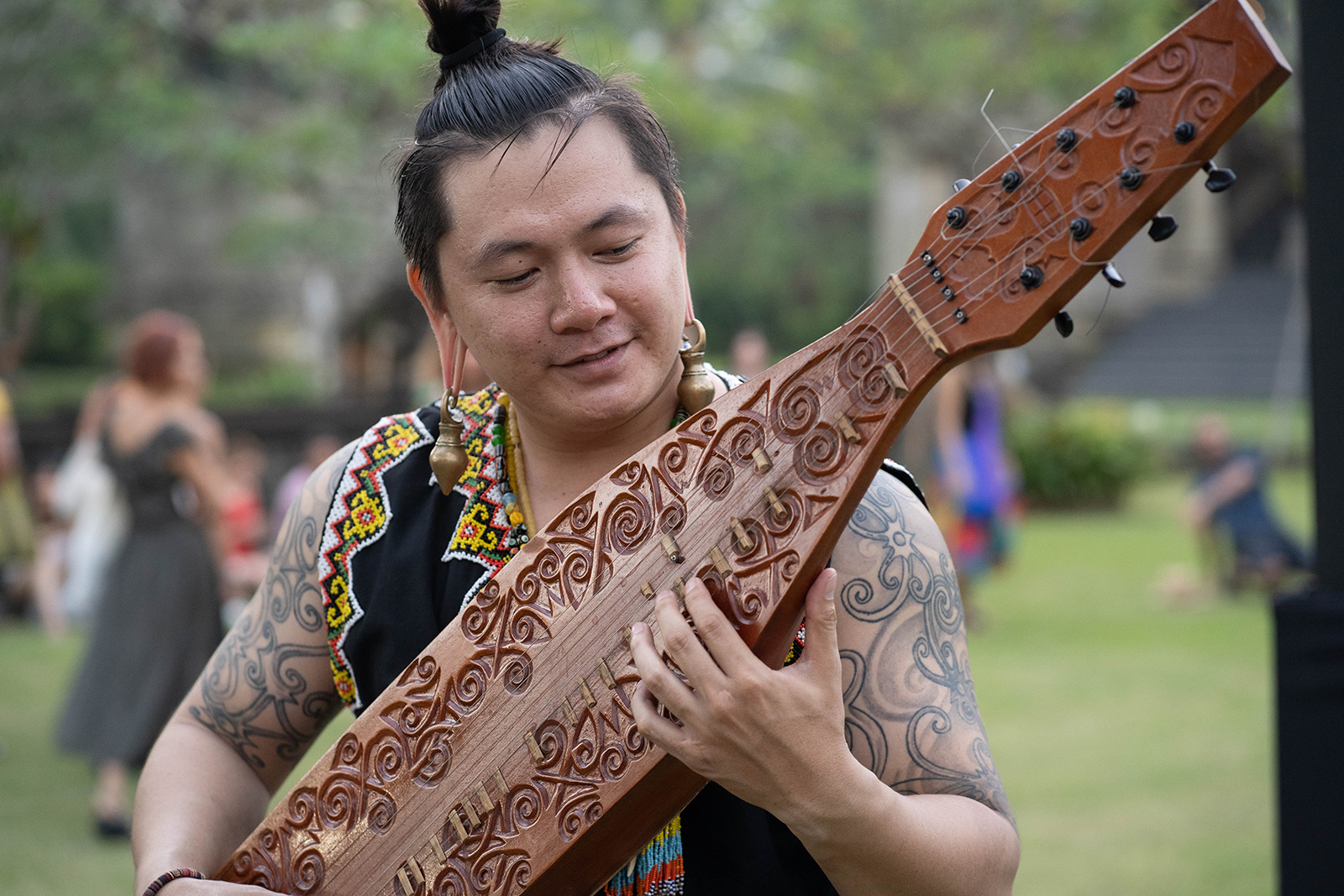 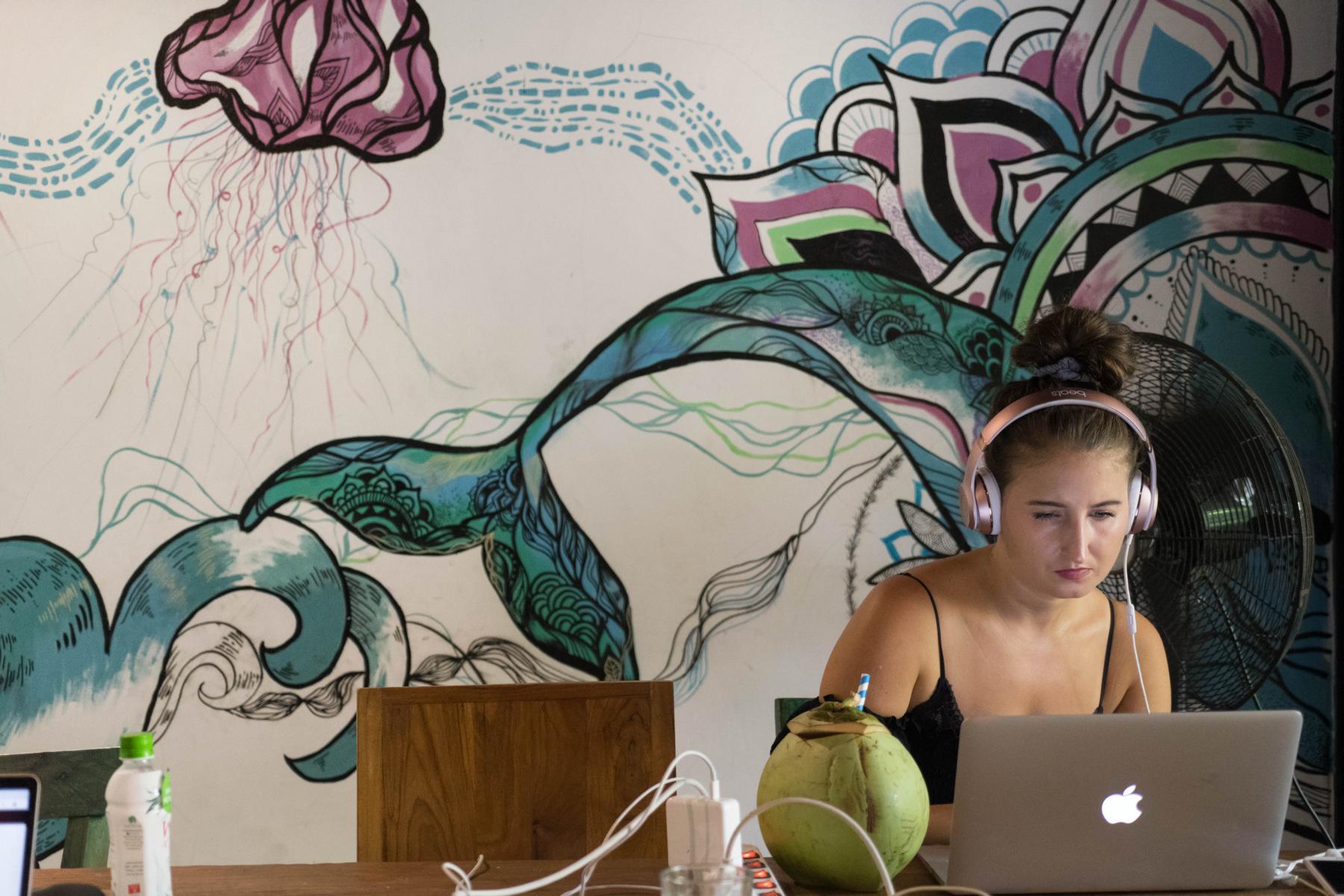 Dojo co-working in Canggu on Bali quickly became famous after founder Michael Craig started it a few years ago, inspired by Hubud, Balis award-winning co-working space in a bamboo architecture close to nature similar to Green School. Michael loved to bring this co-working spirit to the beach at Canngu. So just a few steps away from the beach, Dojo developed quickly as a vibrant and inspiring place for creative people. 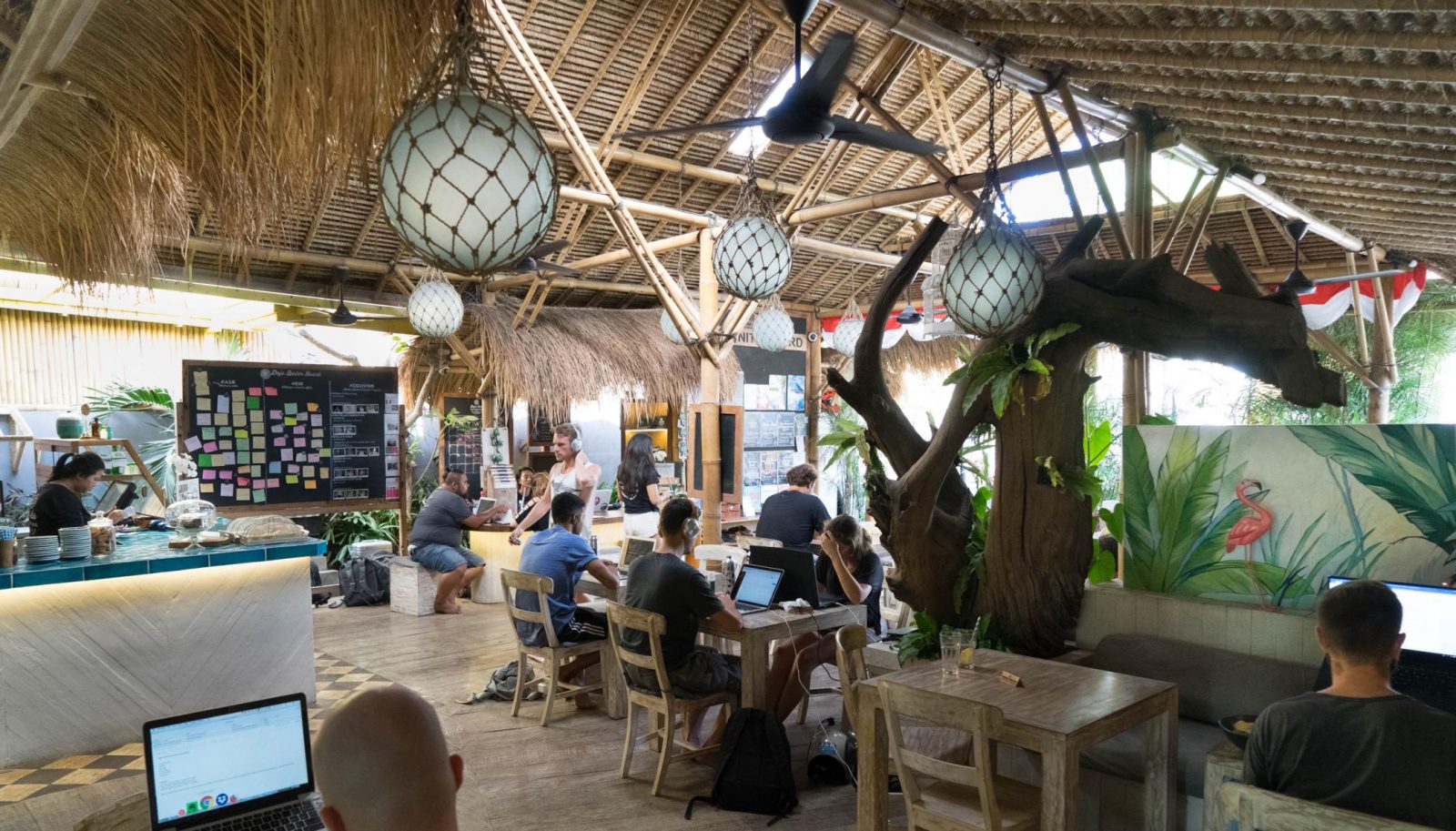 Haren is one of the welcome spirits at Dojo. The japanese word Dojo goes back to buddhist martial art practicing court, a place for intense learning and meditation . 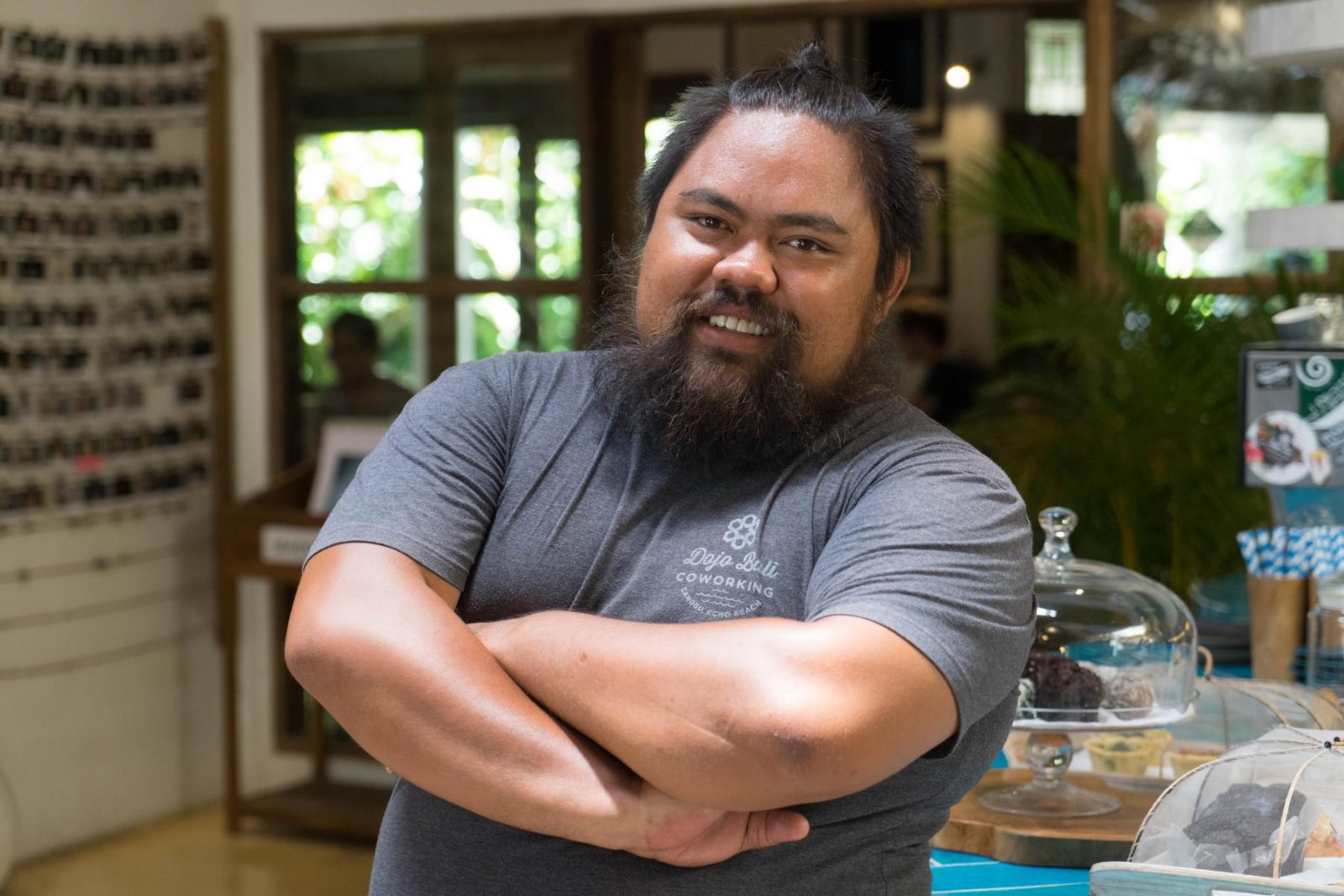 Community spirit as a key issue at Dojo, so it’s a great place to find support, feedback, collaborators. 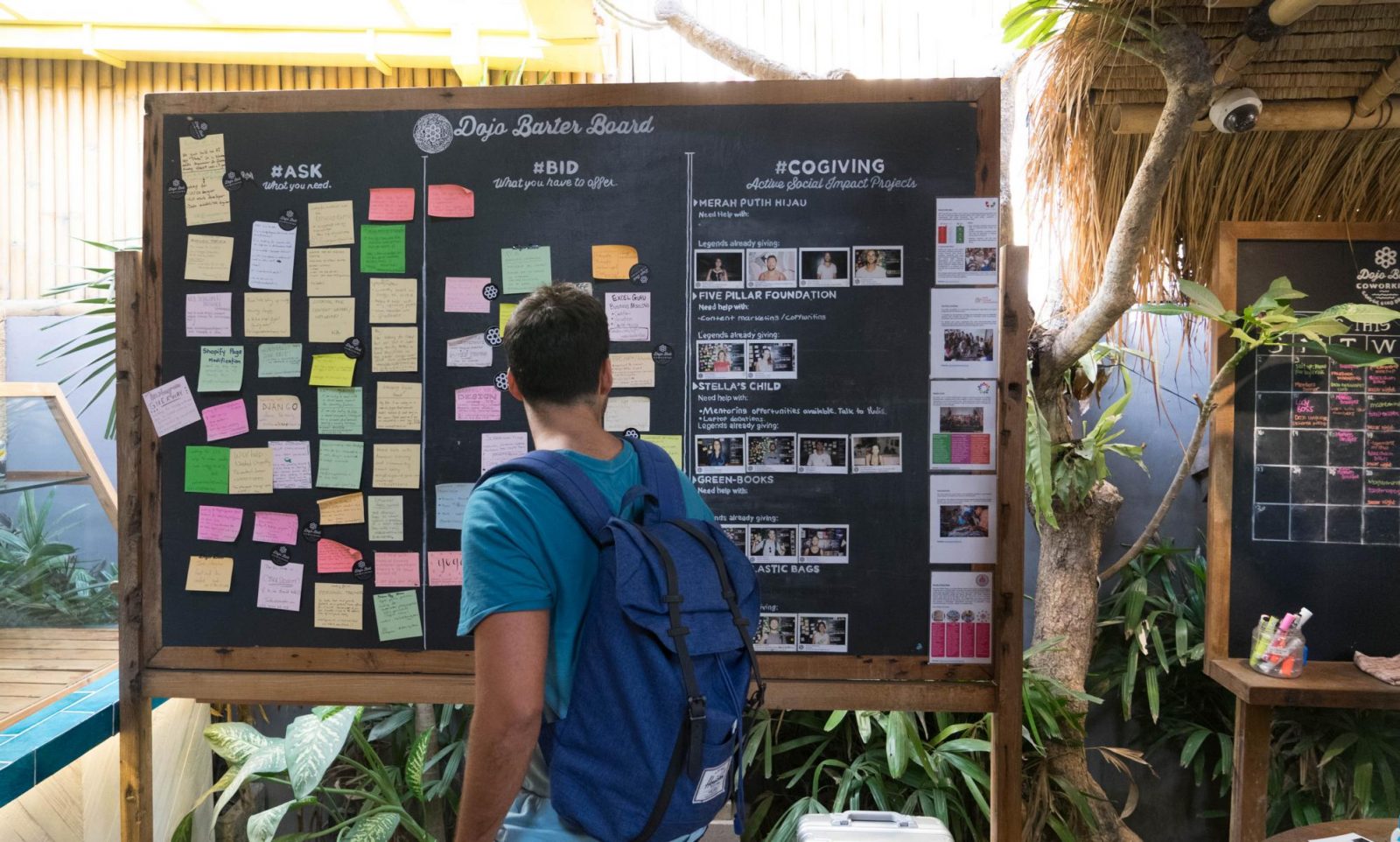 The founder Michael Craig invests a lot of money in a superfast internet on the isalnd, where high-speed internet isn’t a standard. 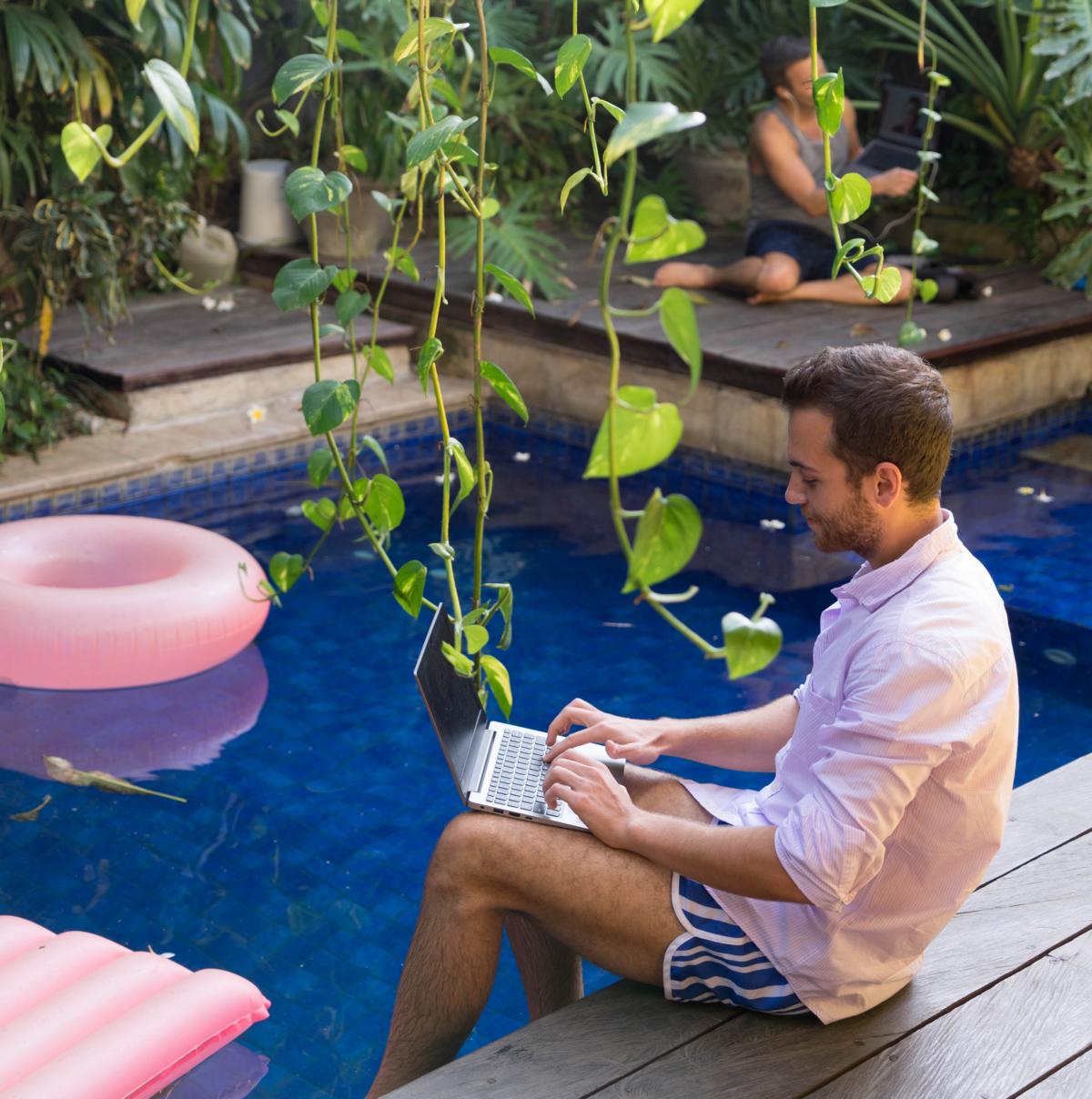 Dojos in-house pool is one of the cool features 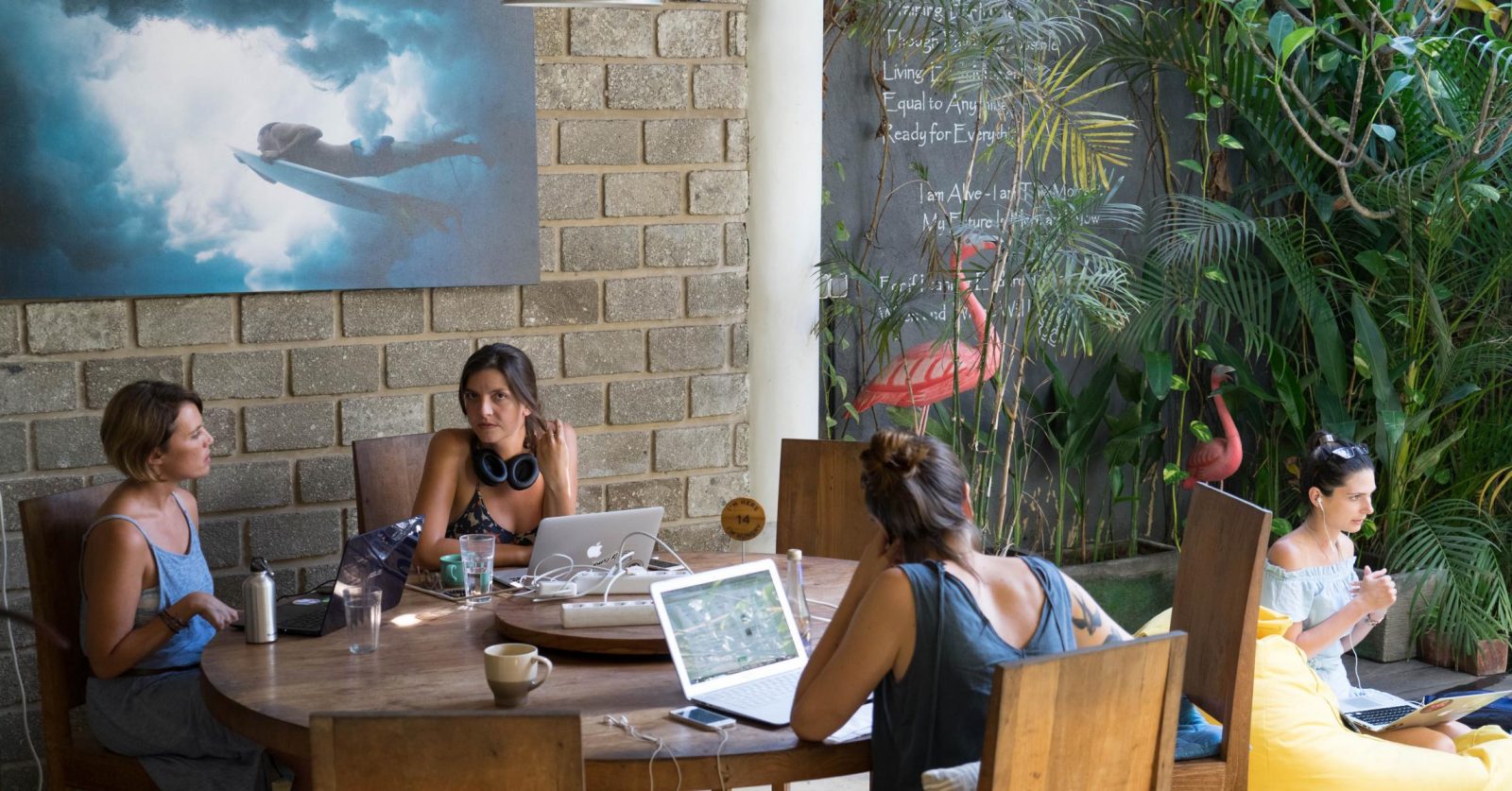 Sometimes its getting pretty crowded. I met a lot of hard-working, very focused e-commerce people there, attracted by the weekly Meet-Up discussing e-commerce, dropshipping, FBA.

Hosting photographer & filmmaker Meet-Ups myyself, I enjoyed to connect to the creative crowd in Canggu as well as in Ubud. 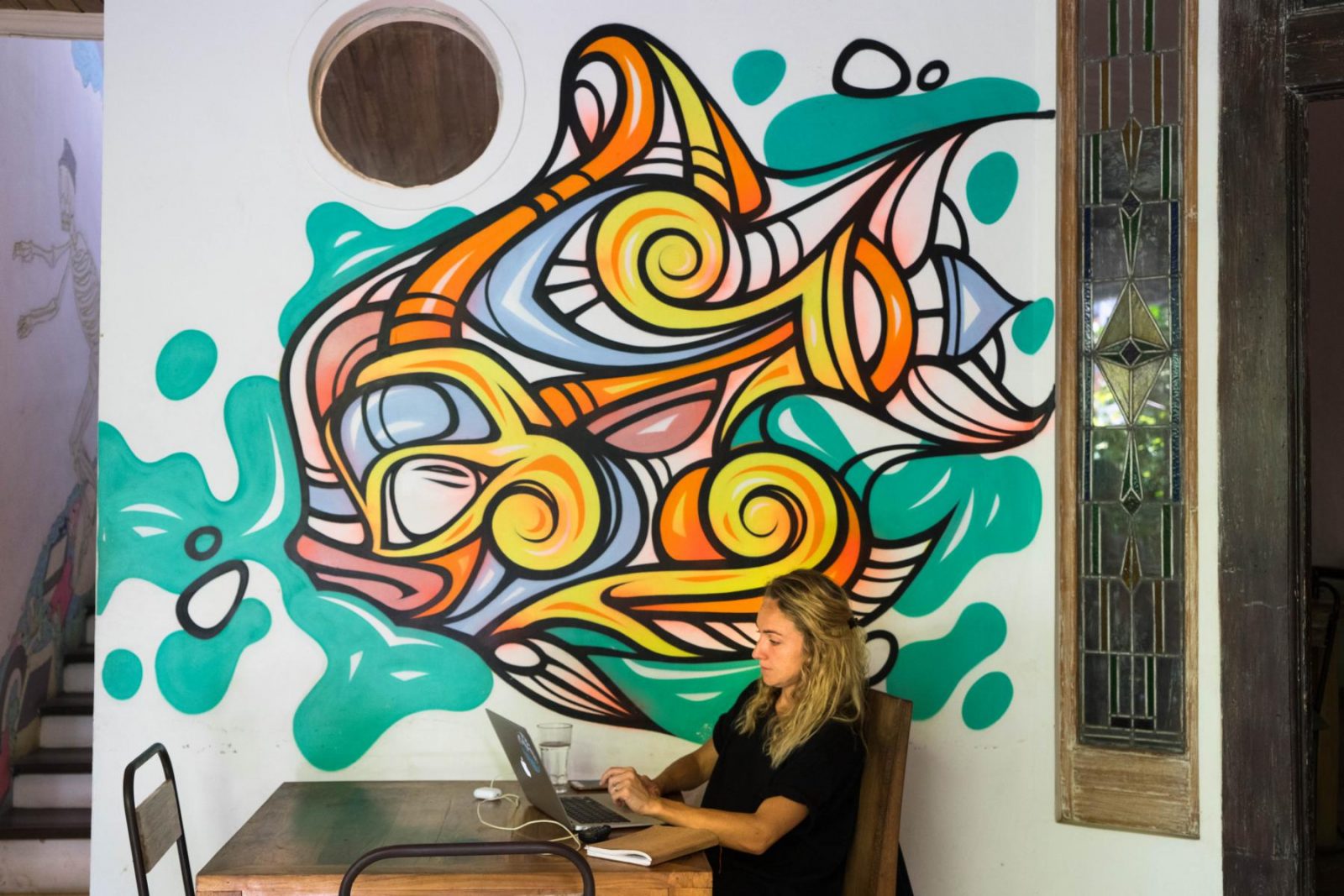 March 2019 the two most famous co-working spaces on Bali , Hubud in Central Bali and Dojo at the West Coast merged. For one membership you’re free to benefit from both places.

Prices are still affordable and I hope it stays that way.  Canggu is perfect for beachlovers and surfers, but  missing a bit traditional local culture you’ll find more in Ubud area. So by the merge you get the best of both places as a member. 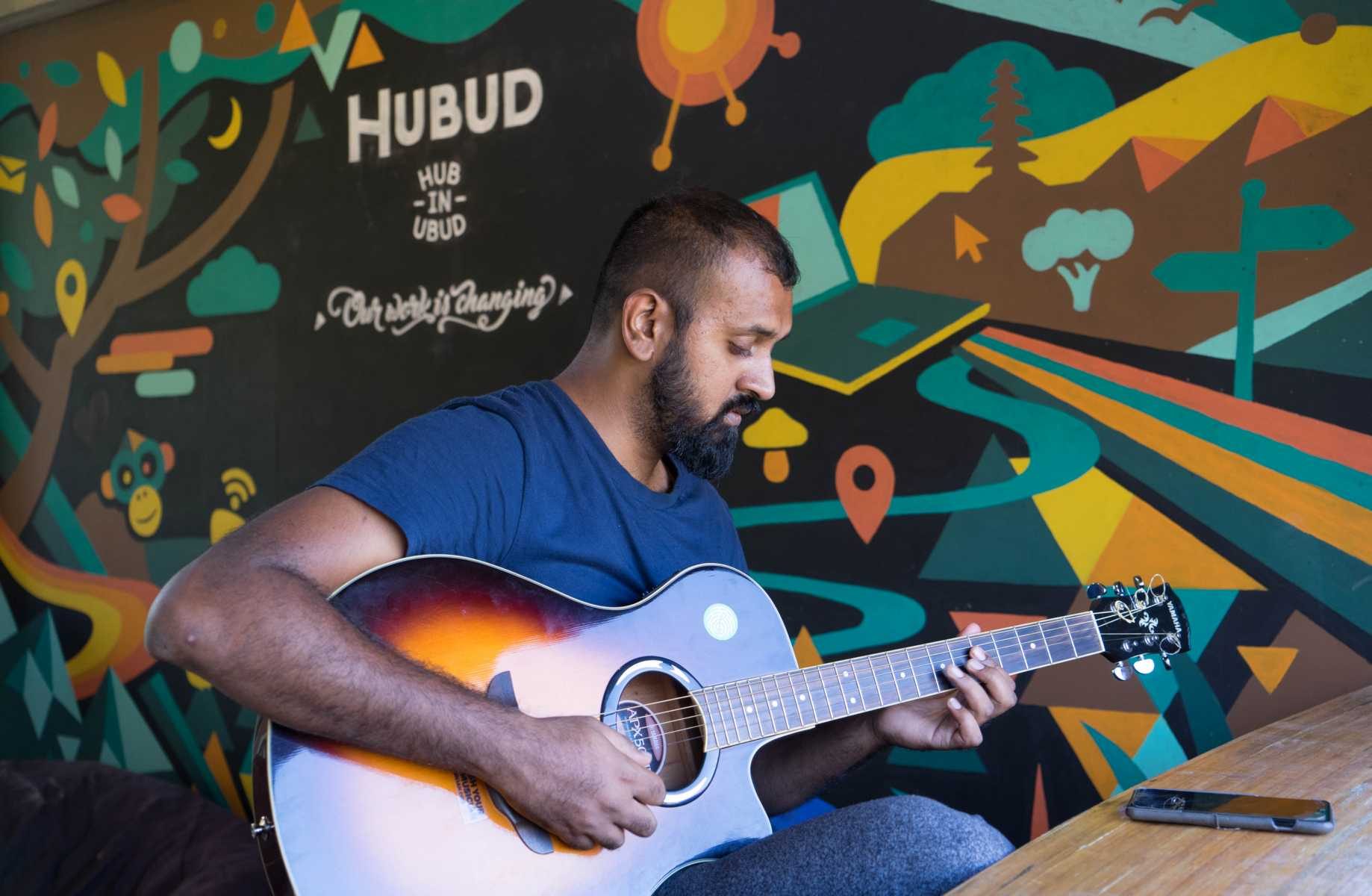 Hubud is a legend – founded 2013 in Balis old capitol Ubud, it was listed in the top ten co-working spaces worldwide for years, award-winning many times. Why? As one of the first co-working spaces it was a  blue-print and model how to do it right, the balance of the best on a highly professional level.

Community spirit, skill shares, meet-ups, inspiring talks, networking, great hospitality and close to nature, the founders knew perfectly what they wanted to go for and make it happen – in the early days of digital nomads shaping what are co-working spaces supposed to be at their best. 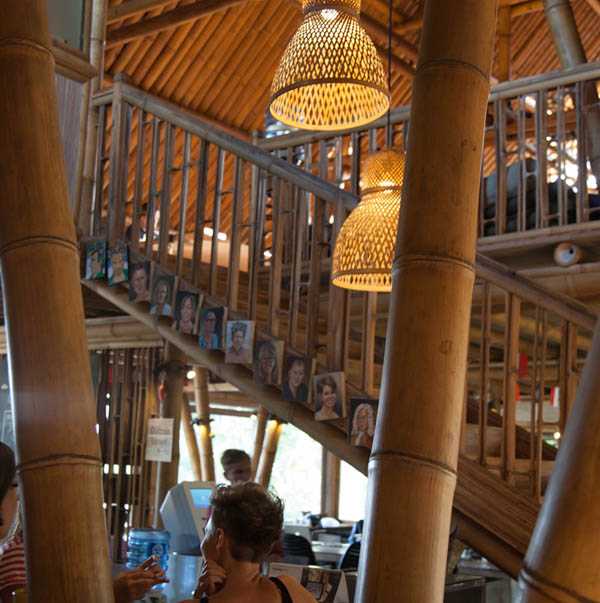 Its Bamboo architecture was inspired by Green School. I’m longing to have a work place like that – close to nature. Barefooted in an open space, meeting people from all over the world on a highly active vibe creating & sharing – paradise for me. 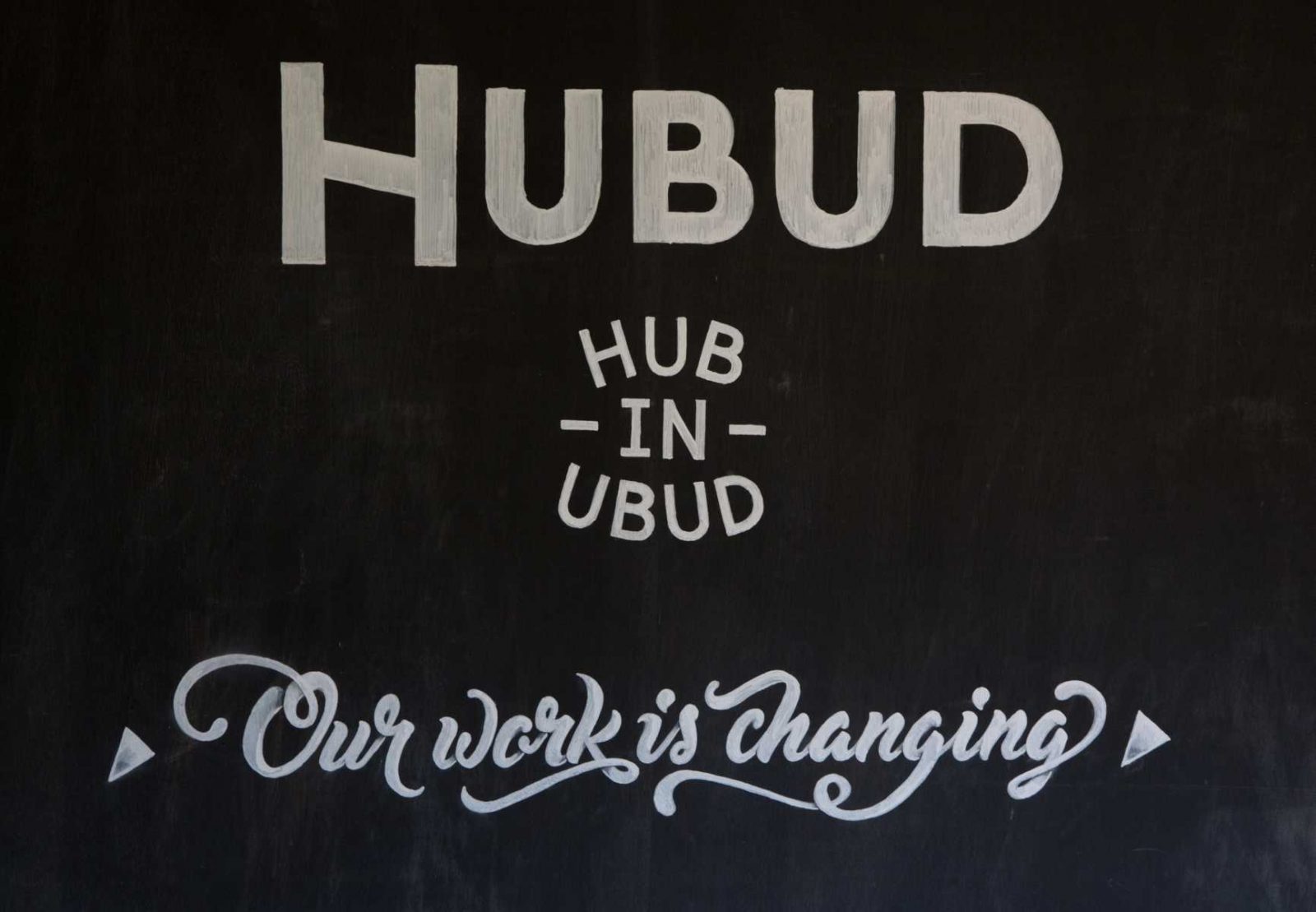 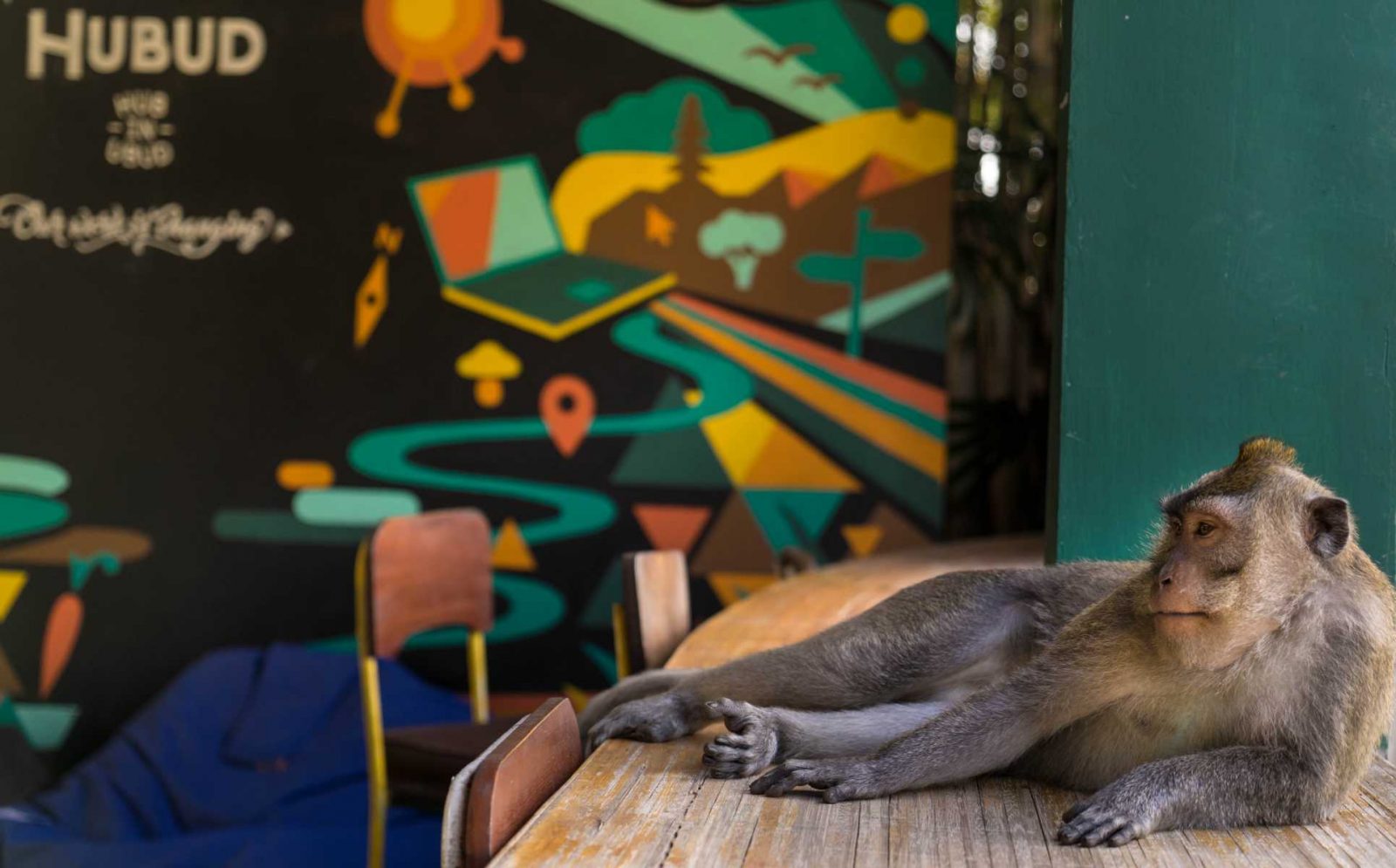 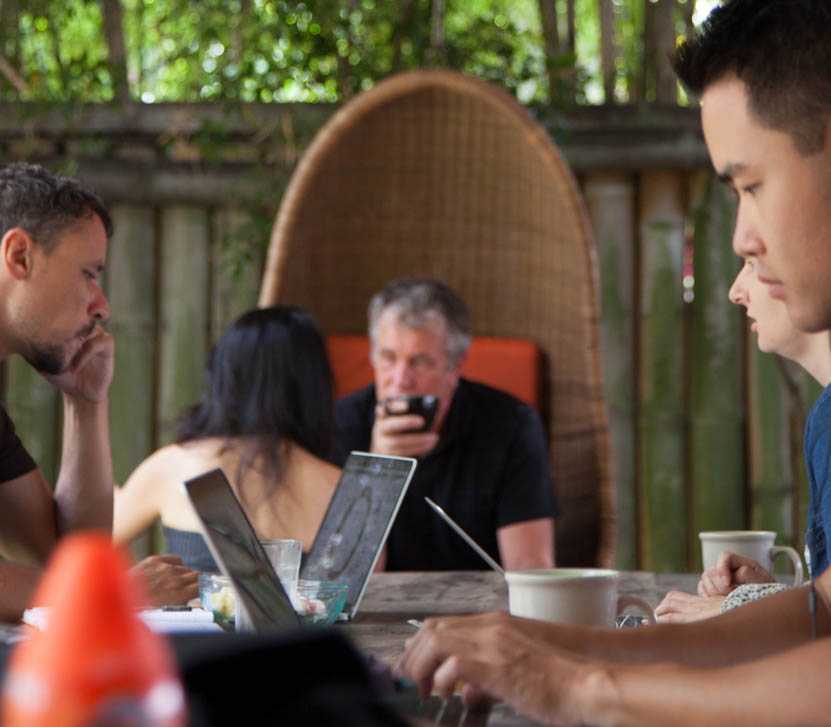 To be inspiring, it needs diversity. Not just business-focused people and coders, but also artists, designers, bloggers, NGO people, scientists, spiritual people and much more. I love to drop in this place and meet all this people hungry to create something new, breaking out of traditional stereotypes.

Diversity needs also access for all: Ubud sticks to a fair price model which allows  to join all members events for a low monthly basic membership price. Thanks for keeping it affordable! 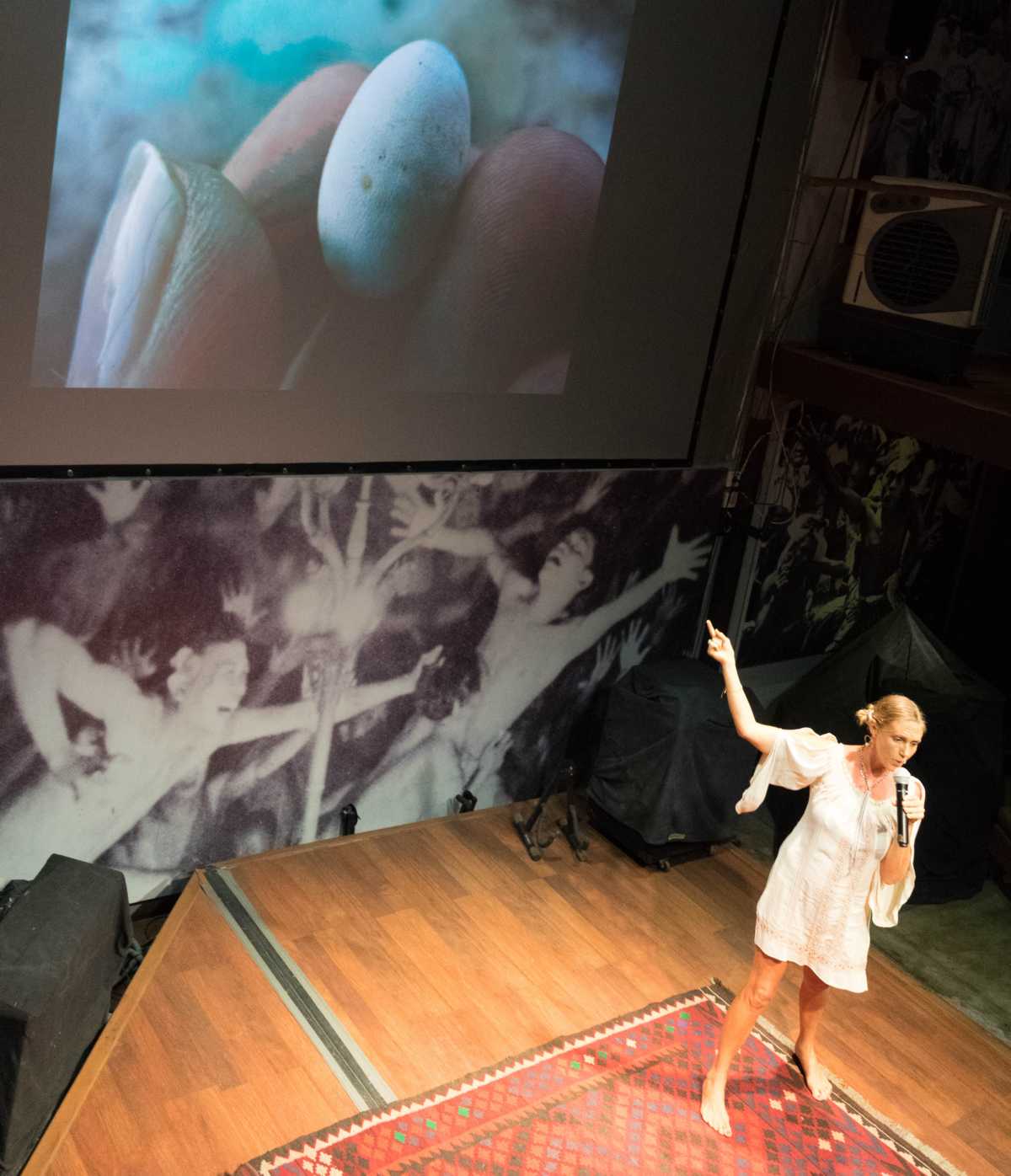 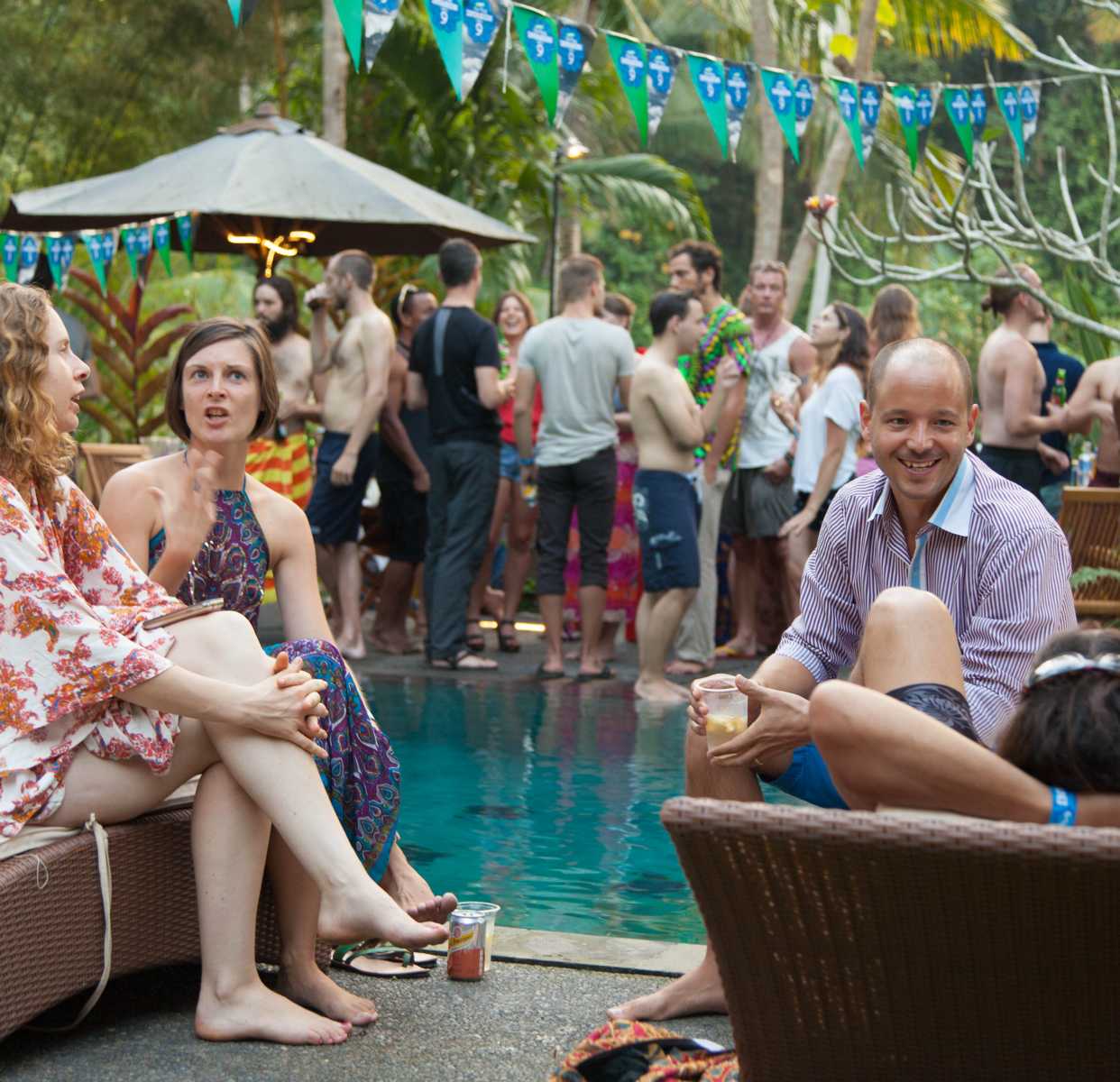 Thanks for all and keep it going! 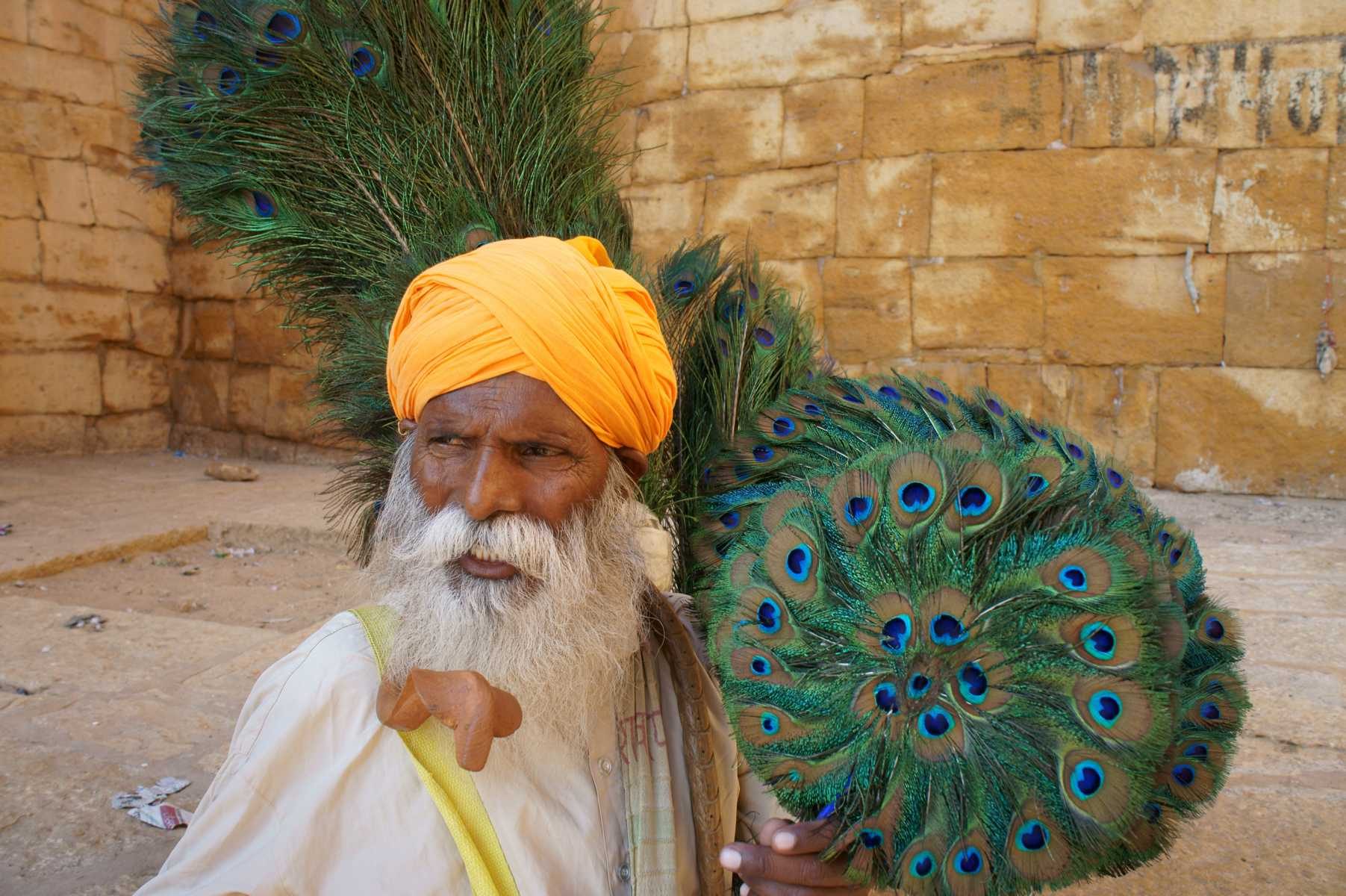 Thanks for coming and sharing!

We were happy to welcome Joe Yaggi, who founded Jungle Run Film productions 1993 in Bali. He worked with BBC, National Geographic and other major broadcasters of documentary film (see also Ring of Fire ). At our Meet-Up Joe talked about Bumi Hijau TV reaching millions Indonesians via local television and his Swadaya project with Rio Helmi, how they raised 25.000 Dollar to shoot a pilot in East Java soon coming out.

Videographer Brian Ebbs presented his latest documentary on the Lombok  earthquake LombokStrong and other works. We also discussed the inspiring work of our colleague Marko Randelovic.

Neyna from Jakarta showed her submissions for portfolio night in Singapore and told us about Doc.Now! workshop  in the Alleyway Café Denpasar and the upcoming MiniKino festival for short films October 6th to 13th taking place in different locations around the island. Have a look on the festival booklet here

Patricia Segovia from Peru showed us, how she started to share her travel experience on social media like her instagram supported by a community back home in Peru

Daiana Paduan from Argentina told us about her travel blog for Spanish speaking audience Dale una vuelta al mundo and how she started photographing to support her writing.

Myself as the host of the evening I presented my latest multi-media history project in my hometown Time Echo ( http://time-echo.de) , my photo reportages on South East Asian culture ( like Ogoh-Ogoh, a reportage used to pitch for a documentary on the same subject now) my Green School Documentary and the launch of the new Travel Blog Cosmic Beachcomber

For blogging, I suggested using WordPress Page builder Elementor, which I discovered on a recent talk on Hubud.

It was a joy hosting, you can catch up  with me on facebook  or on my website Joo Peter

By the way, the cover photo I shot in Jaisalmer, Rajastan.

See you next time