Mentawai – Souls of the Forest

Back to the roots of mankind: indigenous culture of Mentawai, a small archipelago south of Sumatra.

Connect with all your heart and senses: see, feel, touch, smell life in the jungle. The cinematic and compassionate camera conveys an intimate and sensual experience of the indigenous life on Mentawai with its beauty and vulnerability.
Two shamans are the main characters in the film, hunter-gatherers in a culture predating even traditions of weaving or pottery, archaic traditions with their own complexity.

The film portrays daily life of the indigenous tribe, their spiritual cosmos and their commitment to preserving their own culture and natural habitat. Logging companies threaten the fragile eco-system of the islands.

Rare historic footage and archive materials tell the story of decades of oppression of the indigenous culture – but also of the resilience of our main characters and the last tribes living in the jungle. The main character, FatherLaulau had been a leader in this struggle for decades, meeting the governor on Sumatra in a key point of history.
The latter part of the film explores the geopolitical context and shows a new generation joining our main characters in the fight for the preservation of both their environment and culture – as part of a larger movement in Indonesia.

The project is supported by renowned researchers, activists and the Indigenous Foundation.
The film is one of a planned series of films celebrating the diversity and richness of the Indonesian indigenous culture.

In the heart of he jungle – Reportage from shooting days

Fireflies, red dragonflies, the next moment a dinosaur could trudge between the primeval sago trees – south of Sumatra, in the Indonesian archipelago, there are small islands where the indigenous culture is still maintained: the Mentawai Islands.

The rivers lead deep into the largest island of Siberut. The jungle lies in a swamp – the indigenous cut down trees to create paths through the mire out of thin tree trunks – it’s a challenge to keep your balance on long walks across the slippery tree trunks and not to fall into the mud or into a spiked palm tree with your film equipment.

Deep in the forest, there is the Uma, the house of the clan. Airy and open, you feel at home quickly in its cooling shadow. My host is shaman Aman Gelei – the shamans (Sikerei) are the charismatic guardians of the ancient Mentawai culture, they know all the medical plants, how to craft bows and poison arrows for hunting. I got to know some Sikerei during my days on Mentawai, listened to their stories and songs.

The indigenous people live in an egalitarian community. Everyone has a equal voice when there is something to decide, including the children. It roots partly from animism, here the spirits are more at eye level, less an almighty deity of monotheism, which could promote a culture of subjugation and exploitation.

Everything is animated: according to indigenous beliefs, souls and spirits form the interwoven forest. Every human being, in a sense, has two souls: the consciousness and a spiritual soul that could be walking through the forest and meeting other souls while one is working or sleeping at home. In the old belief called Sabulugan, the shaman can see the invisible souls, the whole spiritual fabric of the forest. One adorns oneself with flowers, so that after its wandering, the soul gladly takes its place inside the body again. If someone gets sick, their soul is gone astray on their wandering through the forest, is in bad company, does not want to come back. The soul is like a child, the shaman soothes and lures it like one – with songs and gestures.

The sago tree is the affluence of the swampy islands. If you cut down a tree, you can provide for family and pets for a long time. Some sago trees serve luxury: they feed caterpillars, which are regarded as a delicacy. But in the end, you only get a small basket full of caterpillars from the soft wood of a big tree.

Sago flour is the major stable food on Mentawai. Roasted with grated coconut, it acts as the daily bread. You put the sago dough into the fire inside bamboo pipes or wrap it in sago leaves and put it into the hot coal. The menu includes fruit, chicken, fish, beetle larvae and game. Pigs are not part of everyday meals, their meat is reserved for important festivals and ceremonies. The domestic pigs are half boars and are free to search food in the forest daytime. In the evening their owner sounds the wooden bel, the noise rings through the forest and the pigs come back to the house to get their share of sago.

According to old legends, the sago tree is said to have turned into a human and a human into a sago tree. The tree not only provides food, its leaves serve as a roof and in earlier days, the leaves were smoked as well.

Poison arrows are made for hunting with a bow and arrows. The shaman knows exactly how to find roots and leaves to prepare in the vicinity of the house, and after half an hour, the arrows are prepared to be lethal.

The production of bark clothing is just as fast, but the old techniques can only be performed with such ease using lifelong practice. With a few strokes of the machete, Aman Gelei cuts through the slender trunk of a Baiko tree from which the bark clothing is made. But the tree does not fall yet, its crown is stuck in the dense forest. Aman Gelei climbs up the narrow, bare trunk in seconds and uses the machete to separate the trunk from the top. A moment later, he is down again safely and with quick cuts releases the second layer of bark, taps and rolls it with a wooden tool until soft and elastic – this requires strength and skill, which only forms after long practice. 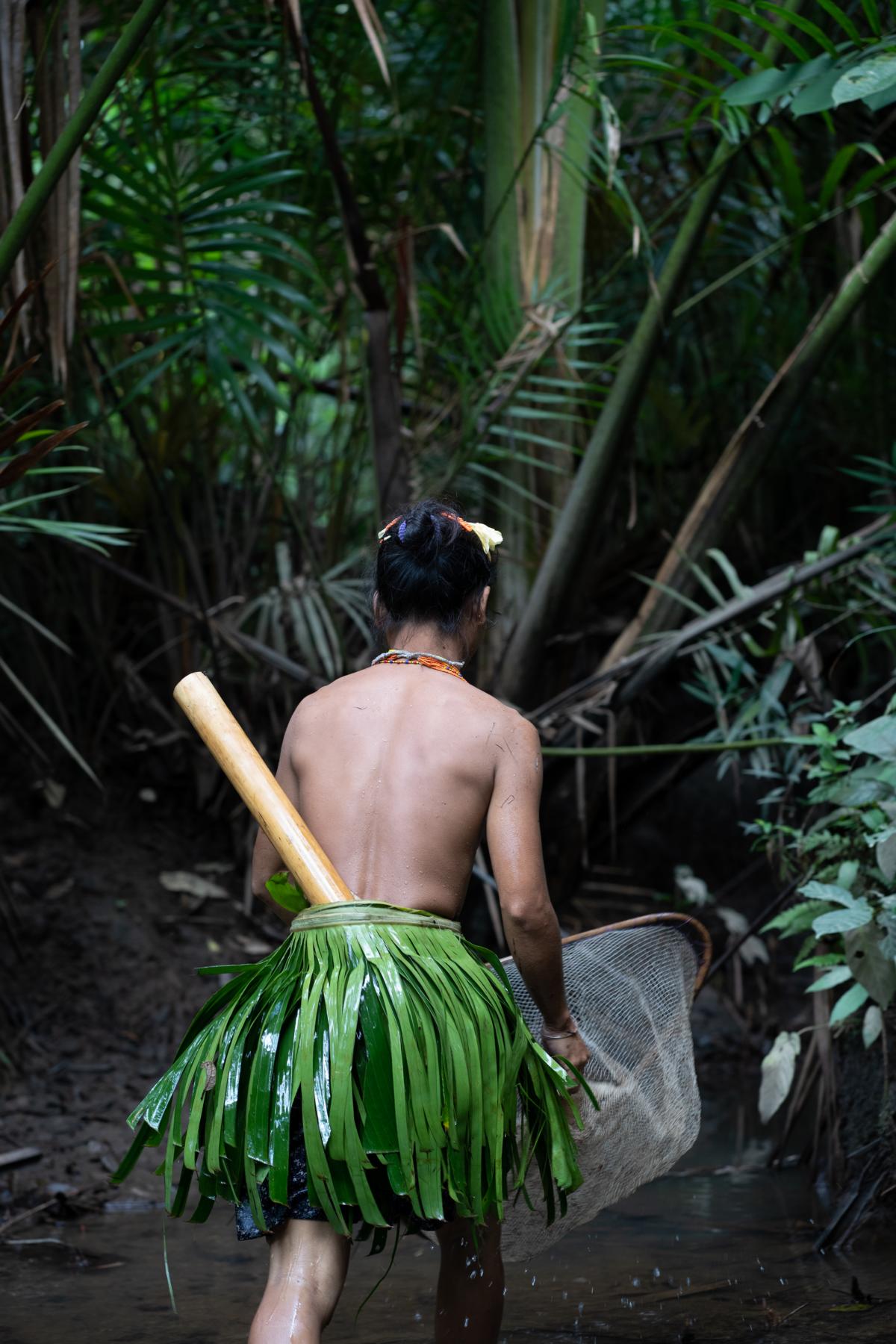 The forest of the islands is maintained to this day, the indigenous people use it regeneratively. But the government has given licenses to commercial loggers who are now moving in on it as well. Here, too, the ancient forests and traditional culture are in danger.

The Australian Rob Henry has been living with the indigenous people for nearly 10 years and has established a foundation to support their culture. He collaborates closely with the organization of the indigenous people Suku Mentawai.They have begun to document traditional culture, language, medical and plant knowledge, stories, myths, spirituality, songs – a project worth supporting. The old culture is in danger, the logging companies cut down the forest. 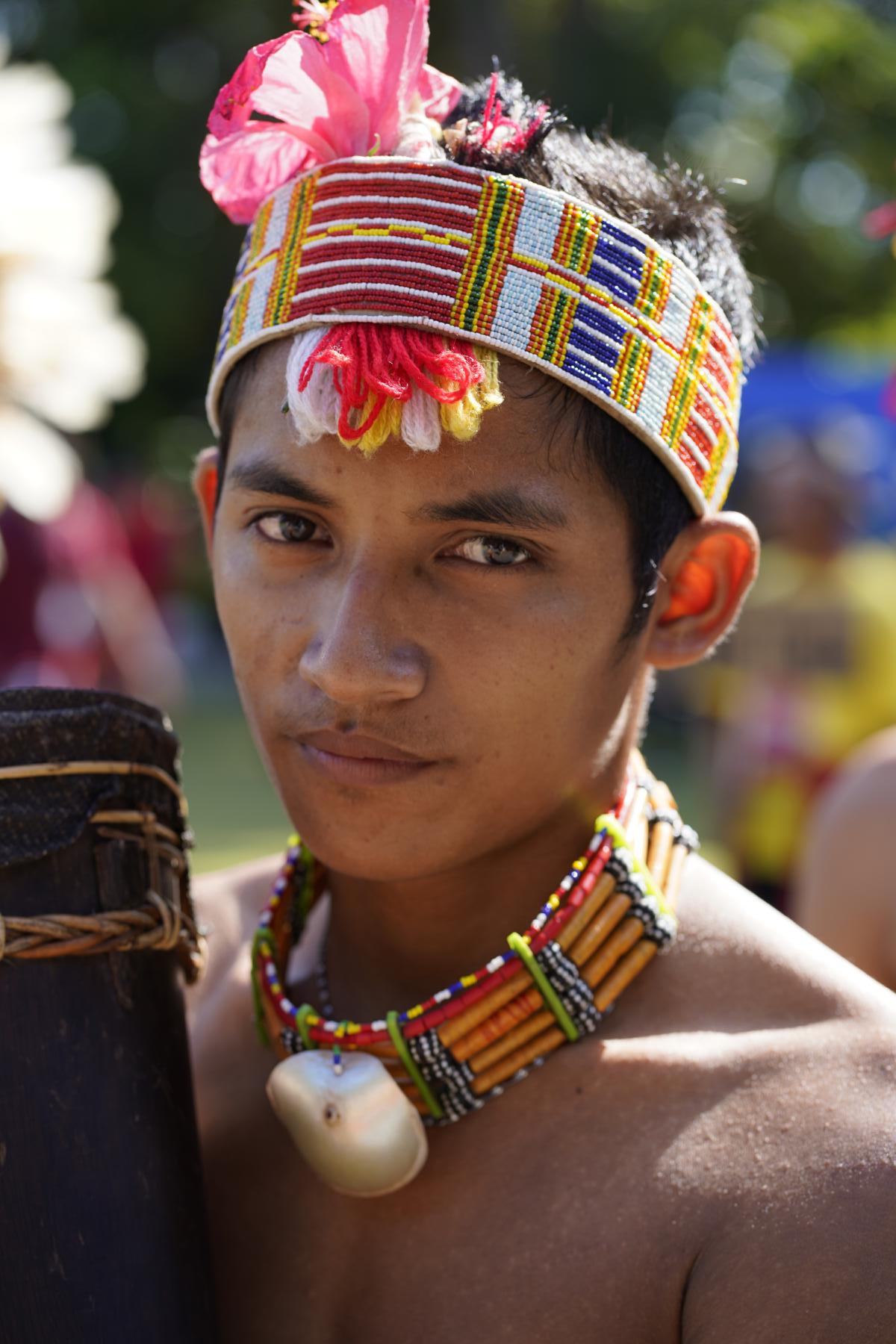